It’s 2019, and the Doctor Who toyline, much like the show itself, is in a weird place. While we have a year’s break from any presence on the small screen, the toyshelves plough on much as they have done for the last few years – quietly. Gone are the days of that oft-posted image of a Toys’R’Us filled with Tennant-era merch, as Doctor Who’s merchandise line has slowly winded down to a series of box-sets, released via budget retailer B&M, filled with repeated characters because there’s no budget for retooling. And while the autumn looks to be a semi-medium push for the range, with a set of Daleks released in partnership with Big Finish (look out for those coming soon), as well as a range of themed Classic Series sets, I’ve taken the chance to grab one that’s already been out a while, to fix a gaping hole in my collection. 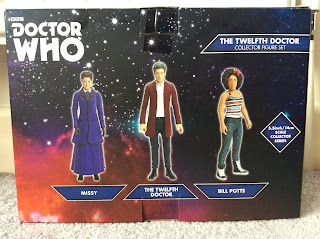 "The Twelfth Doctor Collector Figure Set” was released in mid 2018, alongside an “Eleventh Doctor Collector Set” and “1970’s Collector Set”, costing ~£12 when I picked it up - this is technically a slight revison of the set, but the differences only one figure. At £4 a character, that’s a very not-awful price. The set collects three figures that have previously seen release individually: the Twelfth Doctor himself, Missy (aka The Master) and Bill Potts. In a way, this is *the* Series 10 set, considering it has all the releases associated with that series. Really puts into perspective how far we’ve come since Series 2. The box is nice enough - not particularly eyecatching, but nice enough once you do see it. The space background on the rear is a nice touch. Unlike Classic series releases, there's no episode guide as to what these are from, but the internet is nice enough to tell me.

(Note - I'm too tired to set up a fancy review space, so enjoy these more avant-garde photos!) 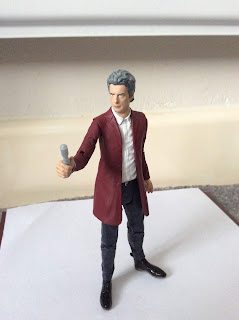 The Twelfth Doctor himself is a repaint of his original figure from 2014, in his red coat from Series 9, particularly “Face the Raven”. It’s a nice costume to have - I think I like this more than his Series 8 outfit, honestly .He has a decent amount of articulation, even if it is lacking compared to other figures released contemporaneously – Marvel Legends, this aint. Still, it’s enough to pull off “dramatic pointing” and “almost running”, the two most important poses, and limited articulation is a mainstay of the Doctor Who figures by now.  Scale-wise, he's quite tall, probably taller than Capaldi is normally relative to other actors. Helps impose Twelve's angry edge of Series 8, I suppose, if the adequate face sculpt and paint don't do it for you. He doesn’t come with a sonic screwdriver, unfortunately, so you’ll have to repurpose one from another figure… all of which I seem to have misplaced in my case. Oops. 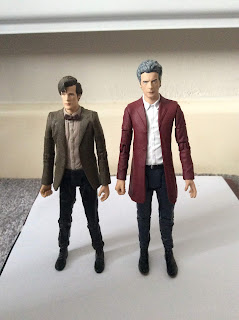 I’ll be honest, this guy alone was the main reason I picked the set up – I mostly dropped out of collecting Who figures a few years back, due to suffering from teenager syndrome, so I didn’t have a Capaldi figure to hand. And for that purpose, he’s almost worth the £12 alone. 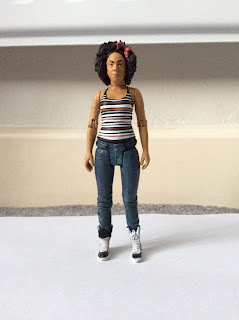 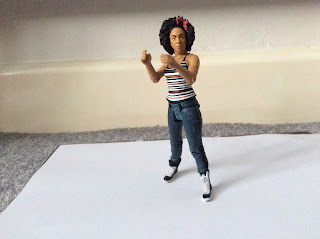 Next up is Bill, our companion from Series 10. Well, main one (Sorry Nardole). Former canteen worker, now student of the universe’s most infamous Time Lord, it’s a shame that Bill shares tooling with a figure CO made for Saturday night show, "Primeval". For reference, that came out in 2007. Still, at least she has a proper figure in this scale - looking at you, Clara -  and as a big fan of Bill, I’m glad to have it. This is her outfit from her debut episode, The Pilot, so if you want to expand your Series 10 range just a little more, you can have her stare into a puddle. (Your other option for Bill is a single card release wearing her outfit from 'Smile'.) The paintwork on the shirt is fine for the scale, with a little blurring between the lines, but nothing major. She has an odd-feeling paint patch on her torso, but it doesn’t seem to be visible; it just feels like something’s been applied wrong. The hair has a little paint splotching on the tips, but if you’re looking from the front, that’s not a problem. And if you are looking from behind, just write it off as a bad dye job. 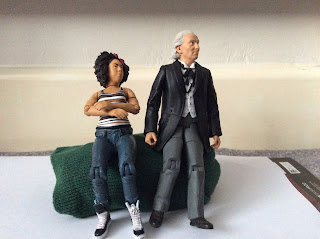 The main issue is articulation. Bill has no outward arm movement, like a lot of older Who figures, and that limits what she can do. Her leg joints feel a little wobbly, but they held fine while standing, so it might just be kinaesthetics. You’re not going to get any amazing poses out of her, so your best bet is to put her in a scene with other characters, and you know what? I had a lot of fun doing it. Plus, I realised I had a Mondasian Cyberman to hand, and had some evil thoughts. 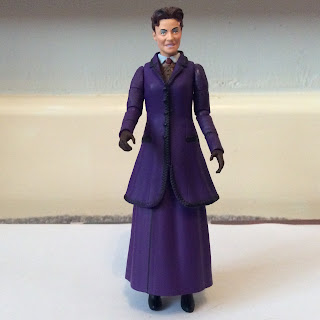 Finally, we have Missy. From the Nethersphere to Skaro, to a vault in Bristol, to meeting her own past self, she’s certainly a fan-favourite character of the 12th Doctor’s run, so it makes sense to include her… even if I’d rather have Nardole for the full Series 10 team. Still, I understand why she's here - she's as an easy repaint from her original 2016 release, combing the hatless head from “Black outfit Missy” with the purple coat from “Purple coat Missy”, minus all the accessories, with a slightly brighter shade of purple and orange cravat. Sources tell me this is her look in Extremis, the best part of the Monk trilogy. Again, I never picked her up in the old days, so she's new to me.

Missy has one big problem though. Her skirt is solid plastic, and this really limits her leg articulation. And by one problem, I mean two, because CO also chose to give her heels. This makes her nigh impossible to stand up, since she falls over at the slightest chance. Her upper body is decent, having  the same outward-moving shoulders of Capaldi, but that lower half… oof. Still, once you have her in a stand, she makes a nice display piece. Missy got off to a bumpy start with me, but I grew to like her past her debut (Series 8 just stopped with Flatline, no episodes past that, no-sir-ee), so a Series 10 colour scheme is ideal for me. Maybe the lack of stand up ability is to replicate how she should be in the vault or something. 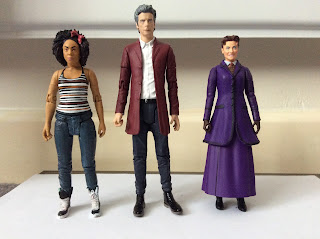 In a world populated by Marvel Legends and Star Wars Black Series, the Doctor Who “Collectors Sets” might not seem very collector-y. But it continues a line running for practically 14 years solid by now, and satisfied this collector. For half the price of one of those aforementioned lines, I got three figures, and I had fun messing about with them, and I’ll have fun when I pull them down from display. They’re not perfect, and they’re definitely more aligned with children’s lines than those above, but that just fits with the last 14 years of figures.

No-one would deny that the Doctor Who toyline has seen better days, but sets like these are doing their best to appeal to both kids and collectors. Would I like to see a full toy line come back, as unfeasible as that sounds in today’s landscape, especially in the distribution hell that is the UK? Of course I would. Perhaps even something on par with those aforementioned lines? Maybe. But, until then, these collector sets are doing some job at keeping the embers alive.

AkibaSilver
Hey! I'm a 20 year old geek, just blogging rambles and reviews for the enjoyment of photography and writing! Feel free to contact me! They/them.